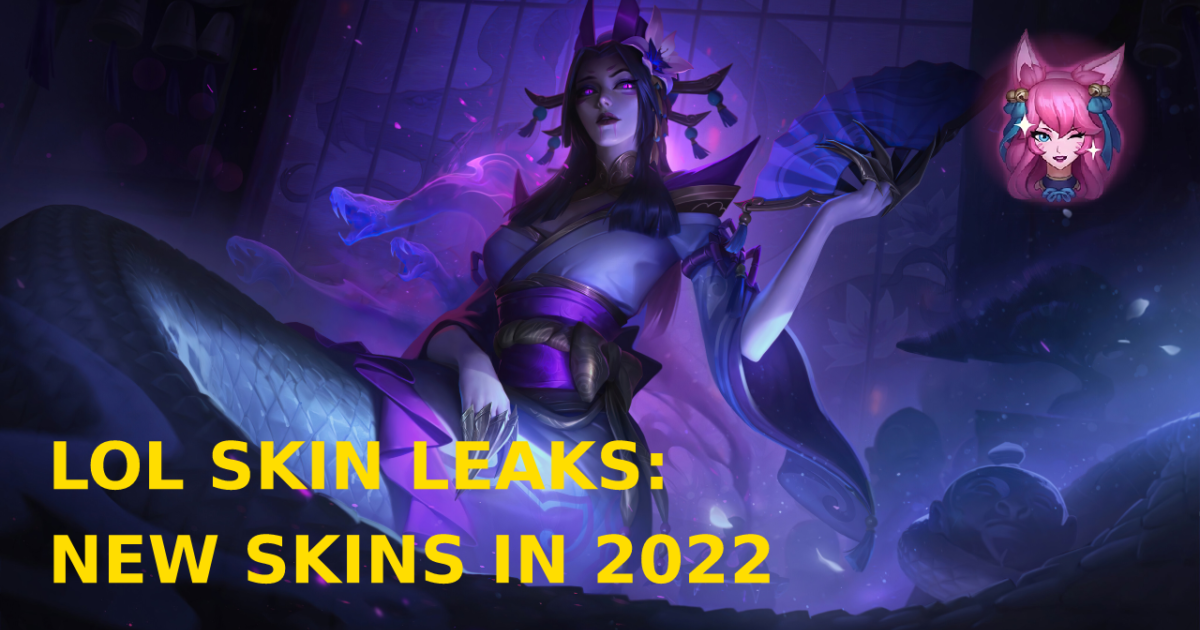 League of Legends releases skins approximately every two weeks. Riot has announced some skins ahead of time, while some are surprise releases. Some skins are kept secret but data miners or leakers will always be able to provide the information that we need. What LoL skin leaks can you trust? Let’s find out.

Let’s now see which LoL skins were leaked already for 2022, and which skins were actually accurate leaks by the League of Legends community. You don’t need to be spoilt if you don’t want it.

What skins have been leaked in 2022

There are many skins for which information has been passed to players. Sometimes, Twitter posts about things like Pussy Shoter Kai’Sa are made. Bluest Blue Taliyah sounds nice, but does that really represent the Taliyah skin we have been waiting for?

Let’s forget about all the troll.txt files, images of notepad, and instead let’s see which skins were leaked from trusted sources.

According to Dataminer Julex_Gameplays We’ll be getting brand-new Bewitching Skins. The Halloween skins of 2022 might seem familiar. Fright Night skinsRiot may still have some Bewitching Skins in stock. You can’t have Halloween without having sexy witches.

Oh, and Anivia should get a huge bat skin if we are already discussing Halloween skins.

According to leaker BigBadBearWe could get multiple skins for the Empyrean Skin Line, according to Riot. Riot has confirmed K’Sante, but the release of more information by Riot and Lil Nas X. K’Sante will certainly release a prestige skin. But BigBadBear says that there could be 7 Empyrean Skins.

The latest splash art for Worlds Azir was created just before the 2022 League of Legends World Championship. We can see Thresh in the splash. With some emotes, icons being revealed to Worlds 2022 rewards. Two very interesting emotes have been reveiled. This could suggest that there are more mecha skins on the horizon.

Rell received her Star Guardian Skin just a few days ago so we aren’t sure if she will receive another skin soon. But, Rell is a person who likes Rell… I would not be opposed to it.

It’s 2022, which means the 2022 FIFA World Cup will be the second most important Sporting event in the World. Sure, the hype has died down due to the location and all the human rights violations surrounding this event, but we know that when it’s time for kickoff most soccer fans won’t give a single sh*t and still watch the event.

Riot released soccer cup skins in 2010, 2014, and 2018. It is possible that we will also get them in 2018. some soccer skins It’s been revealed that Chaos FC and Order United have joined forces again this year. This has not been confirmed yet.

The rift will soon get a brand new skin line called Neon Inferno. 2022 League of Legends World Championship. Although there is not much information on this skin line, it is possible to estimate that champions like Kennen and Urgot might receive skins. They have neither received skins in 2022.

The future looks like this skin line is yet to be determined. What do you want to see in Neon Inferno’s future? I could see a cyberpunk futuristic cyberpunk, with more grunge. But that’s only my opinion.

Riot’s next skin line will be Neon Inferno. According to leakers, the next prestige skin has already been revealed. Jhin will receive a high-end skin In this neofuture scifi skin line.

BigBadBear recently released a video In which he discusses a Chinese leaker who revealed new skins for League of Legends in 2022. BigBadBear stated that the Chinese leaker was wrong before. We should therefore take these leaks with caution, but it appears like Odyssey skins are making a comeback in this year.

Renekton, one of the champions who will get an Odyssey skin for 2022, is his name. This is just an alleged leak, and it could be wrong. But let’s try it anyway, because Odyssey skins look amazing.

Another skin has been exposed by BigBadBear on YouTube This is a possible new Conqueror skin that could be used by an unnamed champion. I wonder who would be the right person to get such a skin.

Fiddlesticks will still be waiting for his skin in 2021 Rell Also, she is in dire need of a new face. She hasn’t gotten one since her release back in December 2020.

For the 2022 League of Legends World Championship We’ve got something special for you all, and that skin is Azir. The skin splash art could also hint at a new line …?

One of the biggest surprises for the year is the return of the Spirit Blossom skins. There are 10 new skins total. My personal bank account will be bankrupt due to the fact that three of my main champions have been given skins at this event.

If these skins do not look good, then it’s because they aren’t. These skins are fun and unique, and they work well.

The Fright Night skins They made their debut in LoL Patch 12.18. These skins have an incredible art style, and the champion selections work miracles. The skins team deserves a lot of credit.

Riot has just released photos of the upcoming Steel Valkyrie skins That will strike the rift in League of Legends Patch 11.16. With the release Renata Glassc’s skin, we have one skin in the universe, but there are now more champions joining the fight.

Riot also determined that Steel Valkyries and Steel Legion, Eternum, Steel Legion, and Dreadnova all belong to the same universe. This means there will be more skins in the skin world than leakers anticipated.

We knew it was the Monster Tamer skins They were coming in 2022. But, no one thought these would be the champions who would receive skins. Most thought Ezreal and Janna would don the Pokémon skins, but it seems Riot has taken a completely different approach with the champions they chose for this skin line.

Star Guardian will be the biggest League of Legends event and last for 10 weeks. This is why we have in LoL Patch 12.14 For this event, even more skins will be available. The group also includes a second legendary and another prestige skin.

Riot has confirmed a number of Star Guardian skins. Riot has already revealed five champion skins, and they will be appearing in League of Legends Patch 12.13.

After playing with your new toy, you might be looking for mythic content. Ashen Knight Pyke skinThen you’re a reason to be excited. Patch 12.12 will see the release of the next mythic skin. So who will be next Ashen Knigth Skin holder?

This skin concept is suitable Perfectly with Pantheon This skin is expected to be fiery, based on what we have seen. With the unveiling Ashen Knight Pantheon, players can also expect an icon and border as well as everything else that they received for Pyke.

BigBadBear has just tweeted the new Snow Moon Skin Line. Below are the skins. The new skin line will feature 3 champs.

Illaoi seems to be getting some love. However, Kayn is the most beautiful skin of all. He looks absolutely insane.

Instead of getting new Pool Party skins, we’ll be getting a whole new set. Ocean Song skin line. This fun line of skin features the following champions:

Bel’Veth’s skin release has been confirmed. How to get a Battle Boss Skin The skin was released. The skin looks amazing and is actually very fitting.

The Haute Noon skins League of Legends Patch 12.9.9 has been confirmed. Five champions will get skins. Leona and Talon will each receive a prestige skin.

Riot leaked the EDG skins before the deadline and Riot even published the official splash art earlier due to leaks that confirmed Lulu wouldn’t receive a skin in this year’s EDG. But what other champions are going to be getting EDG skins?

Do You Believe There Are Skin Leaks in Your Skin?

You’ll have to take all the information on champions and skins here with a grain of salt. These are just rumors and could change. Yes, there is video evidence of some leaks. Riot stated that High Noon skins and Star Guardian skins would be returning this year. However, they didn’t specify when or which champions.

You should not believe everything you read online.