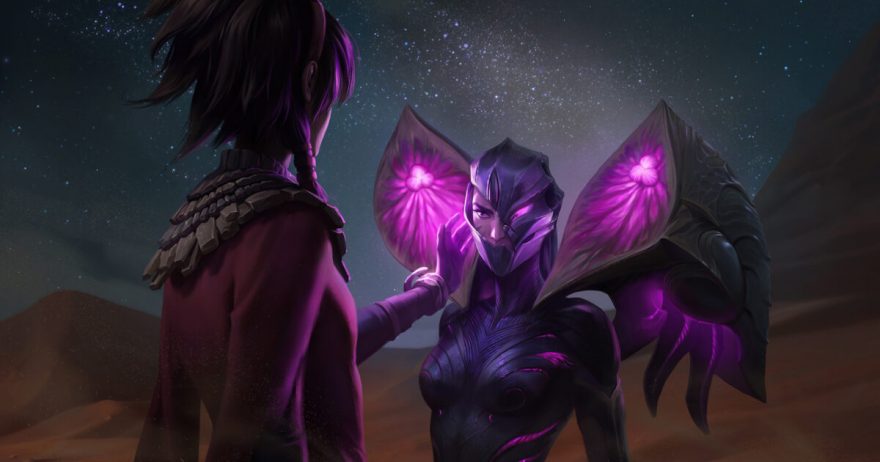 Kai’Sa and Taliyah are some pretty well known champion’s in League of Legends. Kai’Sa’s popularity and presence in meta is what makes her stand out. Taliyah, on the other hand, is well-known for her unique design and fascinating lore.

Riot Games has a new cinematic The CallThey released a short story entitled Hollowspun. The story describes what happened when Kai’Sa followed a strange passage deep within the void, until she meets Taliyah. The story continues to follow their interactions and how they end. Be friends and work together.

What do we know right now?

Kai’Sa’s biography reveals her history and the time she spent in almost every country. Decade in the Void deep under ground. Through recent stories however, we know that Kai’Sa has long since emerged from the void. Kai’Sa was on Runeterra, fighting the void and saving as many people as possible.

Taliyah on the other hand, has always been a Champion rich in lore She is likening her control of the ground to Weaving and tapestries Taliyah traveled to Ionia in order to improve her volatile powers and learned that her home Shurima had been in danger. Taliyah returned to Shurima to train and hone her volatile powers. She wanted to protect her family and all those she could from Azir’s tyranny and the void.

How Did Kai’Sa and Taliyah Meet?

We see Kai’Sa following at the beginning of Hollowspun mysterious tunnel That led her to a large canyon where she met a swarm voidlings.

Taliyah hears the sound of struggle in the chasm and decides to investigate. Try to help by creating some footholds in the chasm with her earth bending abilities so that any survivors could climb out. Kai’Sa narrowly escaped being eaten by the swarm. She used these footholds To escape the chasm, and return to the surface.

Upon escaping Kai’Sa is immediately attacked Unknown aggressor. Kai’Sa launches herself into the air ready for impact and is ready to fight to death. After being wrapped in a red scarf with stone accents on both ends, Kai’Sa is stopped short.

Taliyah, it turned out, was what attacked her. Kai’Sa was another beast These were the depths of darkness. Taliyah saw that Kai’Sa was not like the rest and only then did she stop after Kai’Sa fell to the ground with her helmet bursting. She was human.

What happens after they meet?

After some introductions, Taliyah brings Kai’Sa to her camp along with other survivors. This is the Kai’Sa’s first interaction with other people in more than a decade. She eats it every day and says it is the best food she has ever eaten. The survivors desire to travel to a mythical place called Xolan They will be safe there. Kai’Sa tried to dissuade the group by telling them it was too dangerous to cross desert with void all around.  Because of this Kai’Sa struggles to fit in, being so used to a Realistic mindsetShe Their optimism isn’t understood.

The next day They split their ways Kai’Sa is eager to continue investigating the strange tunnelHowever, she is concerned about Taliyah’s ability to protect the people on their journey to this fabled place from the void.

What happened to the story?

Kai’Sa continues following the tunnel and fighting off any voidlings that she comes across. Xer’Sai, This is a very dangerous form of voidling. While she is fighting, she hears the People scream in unison She realizes that her path has crossed with Taliyah’s and the people she was protecting. She rushes to locate them, but it is difficult to do so amid the chaos. Finally, she discovers Taliyah in hiding under a dome made of rock. She was joined by the rest of her survivors on the land bridge she built.

After Collaboration Kai’Sa, Taliyah and the Xer’Sai are able to save everyone and help them escape. Kai’Sa knows that her only chance of survival was because she had Taliyah. It wasn’t something she did on her own. It was the first ever She had been saved.

Kai’Sa was helped by this interaction Regain some humanity in her Her interactions with the people were more interesting. Friendly and welcoming

Taliyah realized after the tragic encounter that she had to find a way to help these people. They can’t be protected by her alone. After leading the survivors on a safe course, Kai’Sa, she and her decide to follow the tunnel. Xolan They hope to make Shurima a safe place and find solutions to the problem of the void.

What Did We Learn

Overall Hollowspun gave us a deep look into Kai’Sa’s quest to regain her humanity Taliyah’s search for her purpose: Adding depth and meaning to their characters. Although no one expected Kai’Sa to be friends with Taliyah, it is a natural progression. They are realistic, optimistic and secure.

Even though at the story ends there, it’s actually right where The Call Picks up Featuring an epic battle between Kai’Sa and Taliyah. This gives us an extraordinary cinematic look into One of the most memorable stories Riot has ever written.