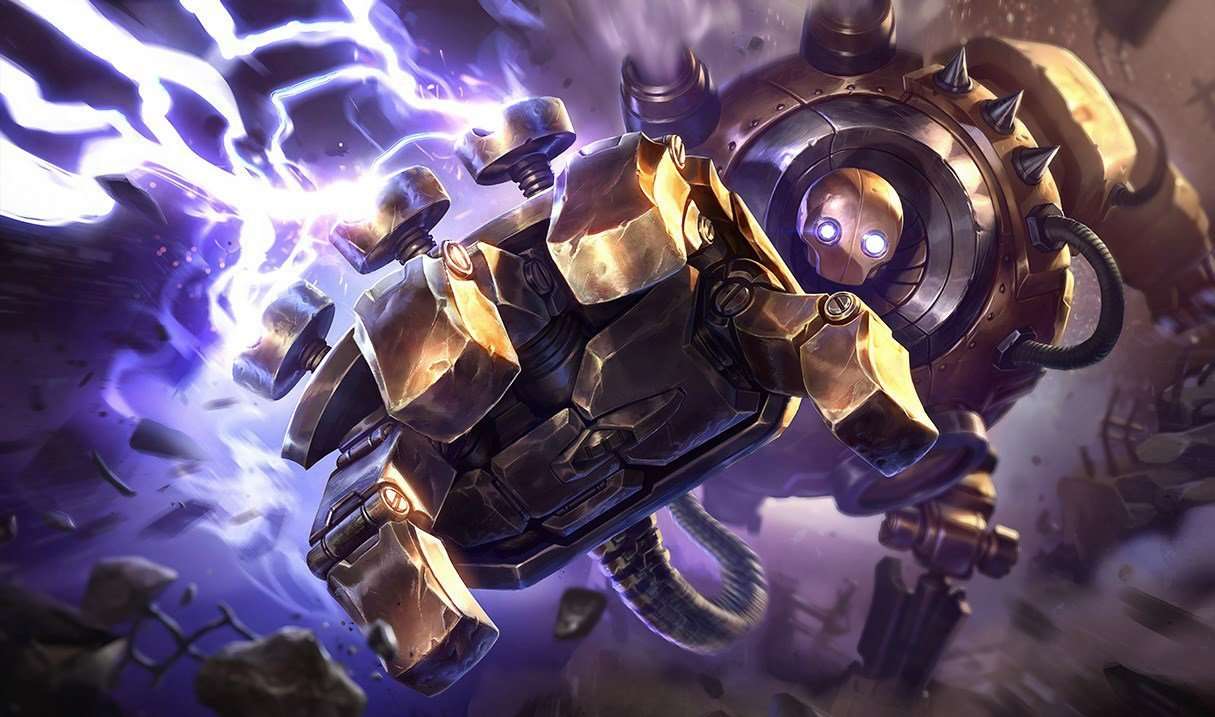 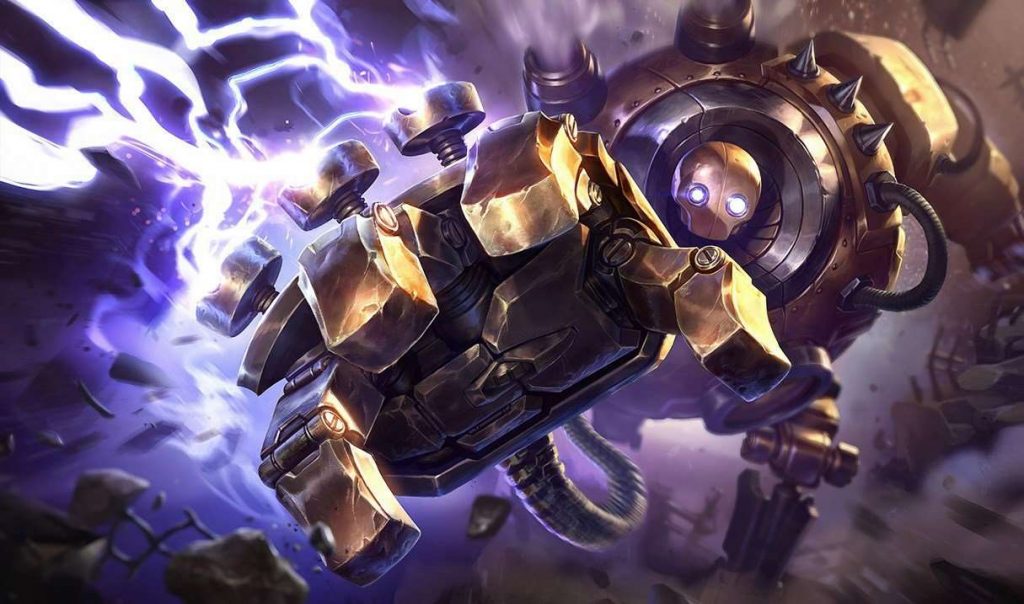 In League of LegendsTanks include melee champions with the strength to take large amounts of damage in order for crowd control to be improved. The Fighter class and Bruisers are close-ranged combatants who excel at dealing with damage and resisting it. Blitzcrank is a combination of both these classes. It offers strong strength and crowd control.

Blitzcrank, a massive and nearly indestructible steam golem, was originally designed to dispose of hazardous wastes from Zaun. However, after a while, he became defective, and it wasn’t long after their original creator abandoned them to rot.

But an inventor named Viktor discovered the golem, giving them another chance in life—with more power, thanks to Viktor using the element “Hextech” in Blitzcrank, making him more powerful, bringing his capabilities outside his original task.

Blitzcrank was able to think for itself and gain insight into their surroundings. They have grown beyond their initial goals thanks to their programming skills. All of this was possible thanks to Viktor and Hextech’s strength.

Blitzcrank uses his newfound strength to help the citizens of the City.

Who is Blitzcrank anyway?

Scientists fled Zaun soon after Hextech was invented. This was unlike Piltover, where they could experiment with volatile substances. These experiments led to many disasters, and toxic chemicals were eventually released into the streets.

The steam-powered golems were created by the college of technology to remove hazardous waste. These golems could transport waste for many days and nights to various disposal sites throughout the city. Even among these machines accidents were common and these robots were frequently sent back to the college in pieces since the gathering of slime at the bottom of Zaun wasn’t easy and over time these acidic chemicals wore down the metal these golems were made of.

Viktor is an ambitious inventor who wanted to make a cleaner, more efficient cleaning machine. He used the leftover parts of retired golems to make a machine that cleaned more effectively and avoided the flashier parts most popular with other creators.

Viktor’s idealism was adopted by the golem who believed that self-sacrifice, altruism and sacrifice could bring about greatness in the entire city. He was part the cleanup team and helped clean up areas not normally affected by polluting. He bravely cleaned up toxic areas due to chemical spillages without going back to college. He originally had big plans for his golem crew, but he soon realized that his own design was not capable of cleaning chemical spillages. One night he borrowed Viktor’s tools and he wrenched open his own steam engine. He had his mechanics set up so that he could have a greater impact on the town.

In order to protect residents from the toxic fumes, he organised evacuations throughout the area over the next few days. He distributed food to increase its efficiency and repaired the filtering system to ensure that clean water could be distributed throughout the community.

Blitzcrank could see his purpose and gained consciousness like no other golem. Viktor was amazed by the bizarre changes made to Blitzcrank’s design. He wanted to reproduce Blitzcrank’s deep sentience and self-sufficiency with other machines. Blitzcrank didn’t reveal why he awoke, so he began wandering the streets and refusing to stop when he saw people in need.

Blitzcrank was capable of completing any task. He stopped robberies, and saved people from being burned. He also returned lost animals. He discovered that many of the animals he saved had become ill due to exposure to toxic chemical. Viktor, who was determined to make human beings immortality possible, was able help him. Unfortunately the family they tried to help died before the cure was made, saddened by their death and his inability to save them made him realise this wasn’t his way of helping people and parted with his creator as a friend and pier.

Blitzcrank sees Zaun as more than a place for chaos. Blitzcrank now seeks out Zaun to find ways to improve society, and he pays more attention to the overlooked. Zaun can become Veloran’s most beautiful city with just a bit of help.

Skills and abilities of Blitzcrank

Blitzcrank is a tool that can be used for creating utility-based websites. League of Legens Champion: Using their Rocket Grab to take out enemies and then locking them down for easy killings. They can also be used in top lane, although they are most often used as support.

Let’s take a closer glance at each one of Blitzcranks unique talents.

Mana Barrier lets Blitzcrank gain a shield based on their mana when dropping too low health—providing a moderate safety net against physical and magic damage. When active, it’s more dangerous, so be prepared for attacks on your enemies, especially when they are having trouble breaking through the shield.

The Mana Barrier can decrease your mana. To avoid any problems, you should use it sparingly.

Blitzcrank uses their right hand fire against enemies to grab them. This causes moderate damage and can be used to drag them back. Blitzcrank’s speed and ability to catch people in narrow passageways quickly makes it an excellent champion against early invasions.

Blitzcrank can “supercharge”, which allows them to speed up their attack and movement speeds. After Overdrive ends, however, he’ll be temporarily slowed. This attack can be used by Blitzcrank to increase his distance to enemy forces. It makes it easier to gain his abilities. To escape your enemies, you can use Overdrive just like any speed booster maneuver.

Blitzcrank activates your fist and inflicts twice damage on the next attack. It also launches your target into midair. This attack resets their auto-attack timer, which you can use quickly from their basic attack—delivering a fast amount of damage.

Rocket Grab can be activated prior to Power Fist. This prevents enemies from moving after the hook has been fired.

Blitzcrank inflicts light damage on enemies. After one second, they will be marked. This ability can also be activated to completely or partially destroy enemy shields. Static Field’s passive attack hits targets automatically when an enemy unit is engaged in combat.

It is better to allow Static Field to passively attack your opponent in a prolonged 1v1 match against champions with no minions or monsters. That’s because its passive damage is higher than the active damage after three strikes.

Blitzcrank was designed to be a “top laner,” making their damage higher than most tank and fighter classes—leading to an offensive playstyle that focuses on killing enemy bot lanes and snowballing from there. You must be agile and intuitive in order to defeat Blitzcrank’s moderately difficult fighting style.

These tips and tricks will allow you to make the most out of Blitzcrank’s strength and toughness to help your team win.

Find out more about League of Legends Champions IRELIA.