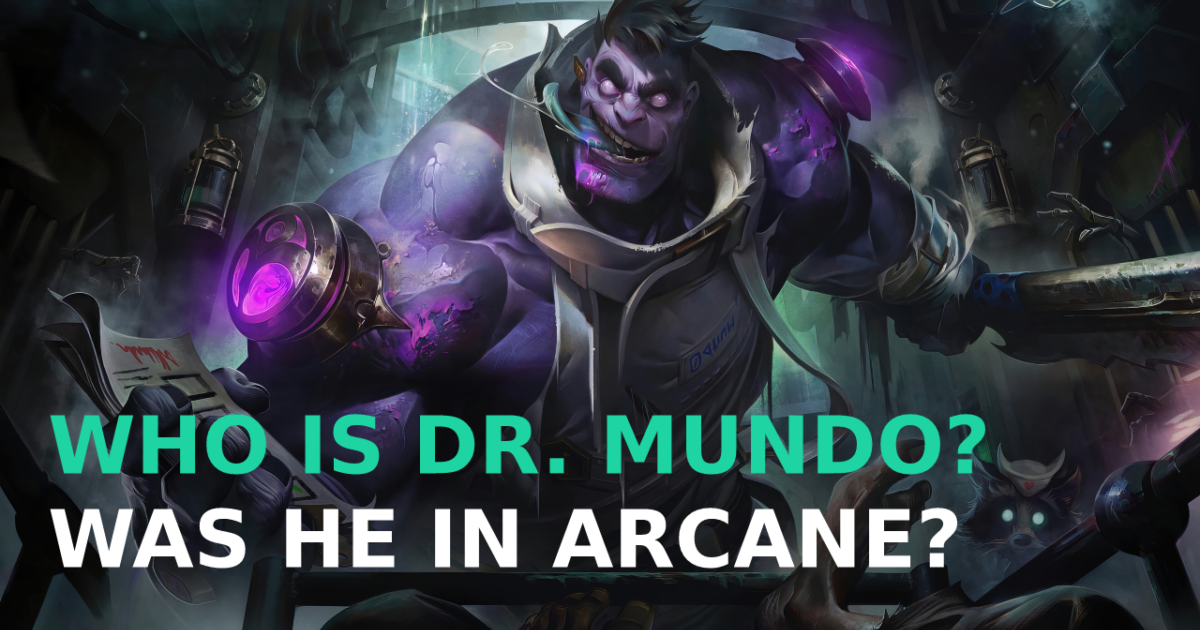 Dr. Mundo was once an ally of a Zaunite Chem Baron. He was a friendly fellow who, as Riot states, didn’t realize the toes he was stepping on while doing his work. One day, he was made an example of other underlings and sent into the Osweld Asylum.

Of course, this was all before Dr. Mundo became the lovable champion we know him to be on Summoner’s Rift. What else do we know about this mysterious person… can we even still call him a person?

As we mentioned, Dr. Mundo was once an aide to a chem baron. However, he ended up in Osweld Asylum. But what happened to the man? He was subject to torture and experimentation until his mind, as well as his body, were altered.

He gained muscle, grew larger – hell even the color of his skin changed, but the worst of it all was his mind. He lost his mind and, through all the torturers and experiments, forgot who he was. He doesn’t remember his past.

The one thing that the giant is certain of is that he’s a doctor. The institution would be nothing without him. His mission was to heal everyone who came to him, and so his murder spree began. Though good in nature, his way of ‘healing’ patients was rather brute and anyone who ended up on Dr. Mundo’s operation table ended up cold, hard and very much dead.

The same fate befell Dr. Mundo’s chem baron. The brute was released by him, but he walked into an empty and desolate structure. A room further down the hall could hear faint, inaudible mumblings but no one else was there.

The former henchman of Dr. Mundo was the one facing him. A now decaying image of the man he once was, surrounded by many dead and dismembered corpses, Dr. Mundo faced no other than his former henchman. Dr. Mundo looked up and saw his next patient. He then walked forward, bone saw in hand.

It was certain that Dr. Mundo would die soon. After Dr. Mundo had finished operating on the chembaron who had just died, he threw away the body and marched out of the building to search for more patients.

Is Dr. Mundo from Zaun

Yes, Zaun’s Dr. Mundo.. He was once an enforcer for a Chem Baron. His friendly nature and attitude eventually angered his boss who decided to make an example out of him, and landed him at Osweld Asylum.

He was once a regular Zaunite. But after enduring many experiments, he transformed into the massive, self-regenerating monster that we all know from League of Legends.

Was Dr. Mundo in Arcane?

A quick snapshot of An image of Dr. MundoBut nothing concrete. Arcane only showed the image of Corporate Dr. Mundo’s painting on the wall. He could have been in the background at some point.

The timeline of League of Legends is a good example of this. It is higIt is highly unlikely that Dr. Mundo has already become the insane monster Without any recollection about his past. That’s why we might have seen him as a background character as a mere chem baron enforcer, nothing more.

We might get to see some! Dr. Mundo in season 2 Arcane, however. His insaneity would fit absurdly well on the big screen.