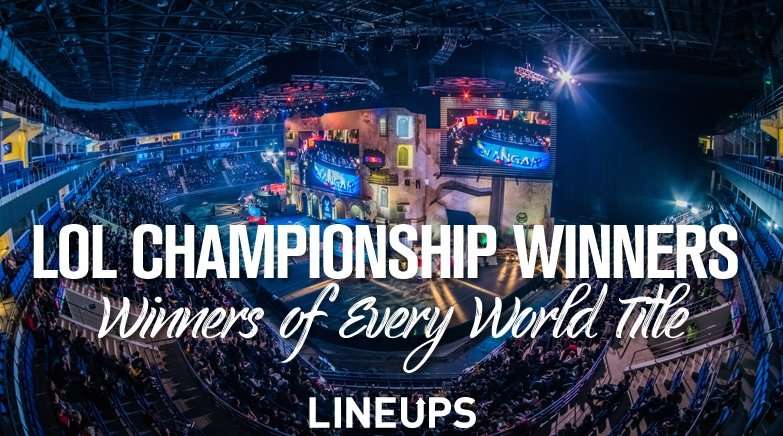 League of Legends is one of the most played video games globally, with over 100 million active players every month. The game is a five-versus-five team battle arena where each player controls a different champion with different abilities.

The League of Legends World Championship is a multi-city event over several weeks, with the final matches being held in one city. The finals are watched by millions of people worldwide, and winning has been compared to winning an Olympic gold medal as it’s such a significant achievement for any player or team involved. It’s a long, arduous journey to the finals, but all groups have a chance of winning the Summoner’s Cup.

The first-ever official organized ‘League of Legends’ world championship was held in Jonkoping, Sweden, from 18 to 21 June 2011 and dubbed the ‘Season One World Finals.’

The tournament boasted a total prize pool of USD100 thousand. Eight teams from North America, Asia, and Europe participated in the event. More than 1.6 million individuals watched the event live, with a peak number of approximately 210,000 during finals.

The Cup was awarded to FnaticMSI, as they had the strongest players in the game. This team would prove to be incredibly dominant, losing only one game in the entire tournament. The final match was against their rivals, Against All Authority, whom they beat 3-1. FnaticMSI also won USD50 thousand in prize money for winning the Season One World Finals.

Following the success of Season 1, Riot Games set the price at USD5 million for the Season 2 Championship. The IPL received USD2 million from Riot Games’ partners, while another USD2 million was given to Worlds qualifiers. The prize pool was distributed among the tournament organizers, who helped organize other League of Legends tournaments throughout the year.

The Grand Finals took place at the University of Southern California’s Galen Center, with a USD2 million prize pool, on October 13, with more than 10,000 spectators. Over 8 million esports fans viewed the entire competition globally, including 1.1 million in the finals.

The Summoner’s Cup was awarded to Taipei Assassins, a Taiwanese team. The Taipei Assassins would be the only two teams to win a significant undefeated tournament, known as ‘sweeping’ the finals.

The competition is best known for the controversy that surrounds it. From the beginning, there were concerns about the event’s format, cheating, and technical difficulties.

The IPL 5 was not aired live on television but rather streamed online for free. Teams such as current champions Fnatic and Azubu Blaze failed to compete in the tournament electing to vie at the IPL 5. Jang Gun Woong, a player from Azubu Frost, was discovered cheating; his team was fined USD30 Thousand.

On October 4, 2013, the Staples Center in Los Angeles hosted the league of legends season 3 World Finals. The event featured 14 of the game’s top teams.

The 2013 Championships final was seen by more than 32 million people, a substantial increase from the 2012 finale.

In 2014, Riot Games rebranded the competition, renaming it the League of Legends World Championship. The tournament was held in several locations before concluding in Seoul, South Korea, instead of previous events held in one place.

The Summoner’s Cup was awarded to Samsung White, a Korean team. Samsung White came into the Championships as a favorite after performing well during the past year. They played against Star Horn Royal Club from China in the finals, beating them 3 – 1 to become world champions. This made Samsung White only the second team in the history of League of Legends to go undefeated in a World Final after winning all their games, known as ‘sweeping’ the finals.

In 2014, SK Gaming player Dennis “Svenskeren ” Johnsen caused a stir by acting racially insensitively. His team was fined USD2,500 and banned from competing for three games of the event.

The 2014 League of Legends World Championship widened the gap between the western (i.e., Europe and North America) and eastern (i.e., China and Korea) teams, with the latter being stronger. USD2 million was given out as prize money to all competing teams.

The LoL Worlds Finals schedule returned to Europe for the first time in its five-year history in 2014, when it was last held in London. The tournament’s hosts for different stages of the competition were London, Paris, Brussels, and Berlin. Bangkok Titans and paIN Gaming were among the International Wild Cards.

The Summoner’s Cup was awarded to SK Telecom T1 for the third time in four years, making them only two teams to win more than one World Championship in their career. The closing attracted 36 million viewers.

This World Championship has always included a lot of drama and technical difficulties. Cloud9’s Hai Lam was fined USD500 for making an insulting hand gesture to an opponent during the group stage. In addition, a game bug occurred for Fnatic’s Kim Ui-Jin, preventing them from playing their games. As a result, Riot Games decided to remove the “Gragas,” “Lux,” and “Ziggs” from the remainder of the match.

The sixth League of Legends Worlds event took place last 29 September to 29 October in the USA. The tournament qualified 16 teams for the fourth time.

SKT won the tournament, with Faker was chosen as MVP, and the team earned over USD2.6 million as award money. The closing was watched by more than 43 million viewers worldwide. The event’s success was expected to help persuade officials in charge of Los Angeles’ 2024 Olympic bid to include an esports presentation in their offer.

The 2016 Championships had the historic prize pot in League of Legends’ history.

The League finals took place in four different cities throughout China. Given the considerable rise of League of Legends in China, this was a deliberate choice, offering fans optimism that their home teams would win the championship.

SK Telecom T1 aims for a third consecutive League of Legends world championship, which will occur at the end of October 2017. The South Koreans have won this year’s Mid-Season Invitational, making the LoL Worlds 2017 an anticipated event with the home crowd eager to put an end to their stranglehold on the competition. The Chinese, on the other hand, were left in the dust by the Koreans. Samsung Galaxy and SK Telecom took first and second place, respectively.

The tournament’s conclusion was scheduled in the Bird’s Nest Stadium, which had previously served as an Olympic stadium. However, viewership of the play-in stage had been smaller than for the remainder of the tournament. The prize pot for the 2018 season was USD4.5 million, an increase of USD1.25 million from the 2017 season. Riot Games boosted the cash available to winning teams; it was initially set at USD2.25 million-plus crowdfunding contributions from Worlds-themed earnings from the in-game store. The final prize pot amounted to USD 4,940,000.

The 2018 League of Legends World Championship was held in various locations throughout Korea. The play-in stage started in Korea’s capital, Seoul, then to Busan for the group stage and quarter-finals. At the same time, the semi-finals were held in the Gwangju Women’s University Universiade Gymnasium, which is notably unusual. The tournament’s conclusion occurred in Incheon, Korea, with a viewing capacity of 50,000.

After the 2017 Championships structure, a play-in round was introduced before the main event. A 24-team international selection was called. Teams fought for a piece of about USD 6 million, which is by far the largest prize pool in League of Legends history.

Having won both the 2017 World Championship and 2018 Worlds, the Korean teams have traditionally been the most prominent League of Legends. As a result, the 2019 League Championships were held in Korea. This meant that even Korean teams that qualified via the LCK were able to enter the main group stage directly, rather than having to compete in a play-in phase for other regions’ squads.

Despite a good group stage showing, the Koreans were eliminated in the quarter-finals to the surprise of many. This opened the door for one North America or Europe team to compete in the finals for the first time (since season 1) and hope to be crowned champion.

Korea was not the strongest region in 2018. After the regular season, SKT continued to struggle, dropping the ball at every chance and even failing to qualify for the League of Legends World title. Since 2016, a Korean team has never failed to win the Mid-Season Invitationals. That said, despite KT Rolster’s poor matchmaking and an unfavorable quarter-final matchup against Invictus Gaming in the quarter-finals, losing 2-3, while Invictus won the championship.

The tournaments were held in September and October, with the Play-In & Group Stages taking place in Germany, the Quarter-Finals and Semi-Finals in Spain, and the Finals in Paris. The prize pool was set at USD2.25 million (base). The prize pool was increased by selling Lolesports passes and unique League of Legends World Championship skins.

For the 2019 Legends Teams Championships, no modifications were made to the format. Twenty-four teams from all around the world traveled to St. Louis for this year’s event, including China, Korea, Europe, North America, Taiwan / Hong Kong / Macao, Vietnam, Brazil, CIS (Commonwealth of Independent States), Japan, Latin America, Oceania, Southeast Asia, and Turkey. Invictus Gaming won the 2018 League of Legends World Championship, all of China’s qualifying teams skipped the play-in stage.

Both the European and Korean squads showed up to be highly competitive at Worlds 2019. G2 Esports, who won both the 2019 Mid-Season Invitationals, faced off against LPL Champions FunPlus Phoenix in the finals. G2 was considered to be the favorite for the title, but FunPlus prevailed with a clean 3-0 performance over Europe’s hopes

The 2020 World Championship was planned as a touring roadshow throughout China, with the finals held at the Pudong Football Stadium in Shanghai. However, owing to the worldwide financial crisis, the tournament was reduced to a single event in Shanghai. Players were required to go through an extensive quarantine period and medical examinations before coming to China.

The addition of the Vietnamese teams’ withdrawal necessitated modifications to the original format, which featured 24 teams. The Play-in and Group Stages were modified, notably elevating all Korean teams into the Group Stage.

TOP Esports and JD Gaming fell short at the inaugural tournament. In the end, the LCK reclaimed its League of Legends dominance after losing it two years ago. Damwon Gaming has been crowned champions after dominating the entire competition. The prize pool of the tournament is USD2,225,000 (base).

The League of Legends World Championships was supposed to be hosted in Shenzhen, China. Due to the ongoing epidemic, Reykjavik, Iceland, will host the Worlds event between October 5 and November 6, 2021. The 2021 World Championships will be in the exact location as this year’s Mid-Season Invitational earlier this year.

The event’s third edition format was altered yet again because Vietnamese teams withdrew from the competition. The European 3rd seed, Rogue, was promoted straight into the Group Stage this time around, rather than being relegated to the Play-Offs.

Riot Games commissioned the winner’s trophy, weighing over 70 pounds. Lifting the Cup is the ultimate achievement for all aspiring League players and athletes but only the most successful team can do that out of sixteen teams participating. Additionally, the World Championship offers a massive prize pool exceeding USD 10 million.

As the League of Legends scene and player base grew more extensive, especially with a mounting interest in Esports, the League of Legends Championship followed. Compared to its first iteration with only eight teams, primarily from EU or NA, the 2021 LoL Worlds is set to include twenty-two teams from all over the world. The steady increase in groups has forced Riot Games to extend the tournament format several times.

What are you waiting for download league of legends.