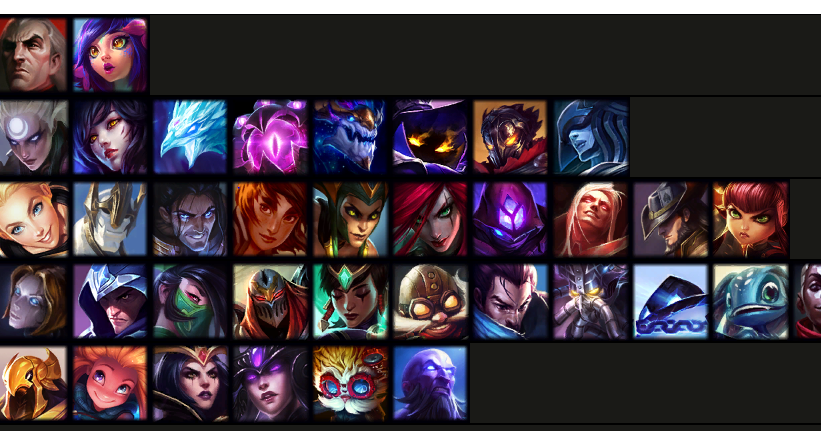 If you are having difficulty in your ranked game, you may need to switch up with a meta-champion. To help you achieve your end-of season ranked goal, we have the mid-lane tier list. These are your Patch 12.18 champions.

In this mid lane tier list we show you the strongest picks for the mid lane. We want you to be able to climb with the best champions this Season. Because you deserve the best shot at hitting your Ranking Goal

The 12.10 durability patch It had a huge impact on the meta, and it is now in a much different spot than at the start of the season. However, we have a pretty good idea of what’s important.

Neeko hasn’t seen the light of day (or played) for quite some time.

Neeko has had a 52% win rate or better for almost four patches straight. This is her best patch yet so don’t forget to grab her!

Neeko was first released in 2019 and has made a very uneventful contribution to the game. Neeko is a champion with a unique design and set of abilities. She even has devoted players who love her despite her flaws. Neeko is a quiet, under-appreciated player.

Neeko is a Midlane Magie that uses illusions and disguises to fool her enemies. Although it was a very interesting idea, it didn’t work in practice. It was not practical, difficult to use, or gimmicky. Neeko became an anti-engage mage with a limited range. While she was effective at disengaging engages, it wasn’t enough to win over Lissandra, Veigar, or Janna. Neeko was left without a meta identity.

But things are beginning to change for the quirky chameleon. It’s unclear why, but for whatever reason Neeko’s winrate has steadily been rising since the durability update. This is probably because Neeko’s damage is so overwhelming, the increased resistances champions received in patch 12.10 isn’t enough to offset Neeko’s damage. It was her damage, not her range that was the problem.

If you’re looking to pick Neeko up, one thing to remember is that she can be very gimmicky. To get the best out of Neeko, you must still be able to comprehend her. Here are some tips to help you understand Neeko.

Vex is a champion that we all love and know. While Vex’s release was slightly delayed, her overall release was a success. Vex was well balanced and fun to play, making her a hit among League players. She was popular all through the season, including into Season 12. Vex’s popularity dropped only when the Durability patch was released.

She was anti-mobility burst mage and long range poke meta was very bad for her. It was because she struggled to interact with many meta champions. Vex is now stronger thanks to recent changes to Second Wind and Scorch.

She is a safe champion who punishes Assassins, and puts kill pressure on mages. She is able to use her kit for both utility and damage early on, as well as enough damage late. Vex is a Midlaner who can do everything. Ahri is the only champion similar to her, but Ahri can exchange damage and scaling for safety. Vex is super easy to use and super powerful!

Swain was reworked in 12.8, just a bit before the durability patch. Swain finally found his place in 12.8 after a difficult and turbulent journey. Swain is a teamfighting draintank that can deliver a power fantasy like no other champion. Riot was reluctant, fearing that Swain would lose all their hard work, to nerf Swain or change him. Swain was the champion for nearly 5 patches straight.

Although the popularity of the durability patch has faded, many players have forgotten about Swain. However, he hasn’t become weaker. Swain’s low mobility and range make it more difficult for him to win matches, but if he is in the right position, he can be as dominant today as he was in 12.8.

Here are some tips to make the most of his midlane.

The A-tier champions are generally quite strong and home to many late game scaling champions. Midlane right now

There are quite a few champs currently in A-Tier. Any of these are great picks! Ekko, Qiyana, and Diana are particularly strong because they can be flexed either in Mid or Jungle.

Riot’s champions are often too strong or difficult to buff in pro-live here in the D tier. These champions aren’t viable in your ranked game, despite being thematically incredible. I would not even consider it if you don’t have more than 100 games.

We just announced Syndra’s midscope update and expect it to be her last D-tier patch for quite some time. Fingers crossed!