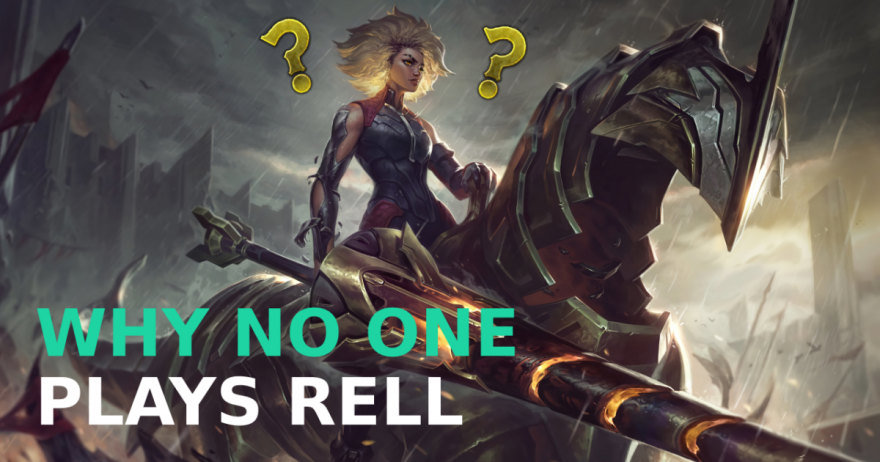 Most champions are released when layers rush to find out the details. They’re the new shiny toy in town and even champions that received a less than friendly welcome are part of this list.

Except one… Rell. This champion was forgotten just two patches after she was released. What is wrong with Rell and why does she have such a horrendous play rate, even though she’s got interesting lore and is one of the newest champions?

Today we’re going to look at Rell and why players seem to really dislike her… or well… forget about her existence in League of Legends.

Rell is not unique

Rell was meant to be the same as Thresh or Leona and provide engaging, tanky support. Riot got the engage and tank part correct, but she was so bad to play that you feel terrible about it.

What does this mean? Rell uses the same generic engage support as every other support, so it’s not surprising that she doesn’t stand out. If you have already mastered Leona and Nautilus, would you consider picking up a new champion?

Rell’s Crash Down, so her first W cast, is her engage and her E and ultimate, are for AoE CC. This is very similar in play to other engage support. Why bother learning Rell?

Playing with Rell is not rewarding

Rell does not find it rewarding to play. Rell can jump in the danger zone thanks to her W. She then has two options: her tethered X to stun someone, or her ultimate to draw her opponents closer.

But, using her W means she becomes slow, clunky and if you don’t actually get the kill, well then you’re just the sacrificial lamb of your team, because her movement speed is so low that no matter how hard you click, she just won’t move any faster.

Leona does it exactly the same way, but with less risk. She doesn’t turn into an immovable champion once she goes into a fight. It feels much riskier with Rell and oftentimes, especially in a solo queue setting you’ll time your engage wrong and die.

Her Crowd Control Isn’t as Good

Rell has two crowd control capabilities in her kit. Magnet Storm is her ultimate and Attract & Repel, Her E. But when looking at other engage supports these abilities just don’t measure up to them. Nautilus and Leona both have long ranged cc thanks to their ultimates, while Rell’s ultimate has no range at all.

Rell’s ultimate, while also not being long ranged, also has another issue. It’s not a full stun. It is possible for opponents to escape magnetism, if necessary. It isn’t reliable against champions with dashes or blinks, making a Leona or Nautilus ult much better to use.

Also, The stun duration of her kit is very short compared to other engage support.. Rell only has about 2 seconds worth combined stuns in her toolkit, Leona just over 3 and Nautilus (depending on the level, even more than 4 seconds). Even if you do everything correctly, this does not give your team enough time react to crowd control.

The LoL Champion Most Unpopular

Is Rell a bad champion?

Rell is a good champion. Riot attempted to use her interesting abilities to create an aggressive all in engage support. But with so many great and popular champions, it seems that they failed to make her unique enough for anyone to want to play her.

She is the type of champion that requires a lot of communication, something that just doesn’t exist in solo queue. Because high elo players know when to engage in fights and when to stay out of it, she has a good win rate in high-elo.

Should you play Rell? Have fun! engage champion that is all about going into fights, then yes, but if you’ve mastered Leona, Nautilus, ThreshAlistar, it might not be worthwhile as they can do whatever Rell does.