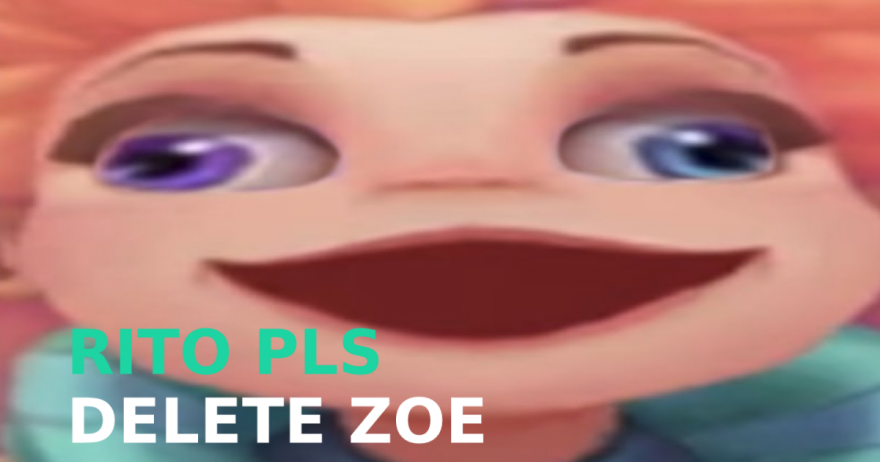 League of Legends has too many heroes. Let’s delete some champions that the majority of the community doesn’t like. Yes? Yes. Let’s do that. We’ve already analyzed Seraphine and why she should be deleted – her lore and kit are just awful – and of course, we’ve ranted about Yuumi before as well.

Who else can we do with? What other champion just gets on our nerves – and many people’s nerves – that petitions are made To have a champion deleted, signed by the thousands Well, none other than our favorite little girl from out of this world – Zoe. Riot please, get rid of this.

Have you ever thought, hey this champion looks fun let’s try them! Then, I realized that This champion is not for mere mortals? Seriously, if you’re not in Diamond plus and just casually play don’t even bother with this champion.

E, Q forwards, Q at target again, R forwards. Do this over and over again. Rinse and repeat. For casual players, they’ll break their fingers and is RIot going to be paying those hospital fees? Nah fam. Garen is my friend.

What are you waiting for? Yuumi has lost her touch in social interaction. Zoe is too good at it.. All of us are not capable. Chovy Oder CapsYou think you know?

Her Power during Her Debut

Zoe was immediately dislikable when she was first released. It was her playful attitude that called even the greatest Aurelion Sol a ‘space dragon’ which yeah, she isn’t wrong he is a dragon from space, but he’s also the most powerful creature to have ever set foot on Runeterra, ya know?

Okay, enough of that, it wasn’t her fun attitude that ticked the community off, But she can do insane things. Sure, she’s a Burst mage, that’s her job, but some of those paddle stars were just ridiculous. Take a look at for yourself.

Seriously, Zoe can easily gain a lead even if she plays it safe and doesn’t do much during the lane phase, then once she hits the late game with two or three items she can one-shot anyone, no matter how thick of a health bar they’ve got.

Riot has nerfed Riot, but that sentiment is still held by most players who continue to hate the champion. It’s a guess. League of Legends players have grudges for a long time, eh?

Thank you to her W Zoe is able pick up mobility free of charge whenever she requires it. She is perceived as a disadvantage by players and they believe she is receiving freebies. While one of her spells may be a third summoner, it is fair to give her so many mobility.

She can evade attacks with her ultimate, she’s got an extra flash on hand if she needs it. Zoe has everything she needs to put you to bed. You will die, but you won’t wake up again. RIP.

Zoe is an awful champion too happy in this dreary world of Summoner’s Rift and the salty players cannot handle her. So yes Riot, Please delete this comment so that we can get our sanity back.

Instead, give her the one-shot power to Aurelion Sol. Allow him to absorb the Aspect of Twilight and become the enormous world-creating dragon that he was once.

You need someone to help you navigate the rift. Please get rid of this abomination on Summoner’s Rift.