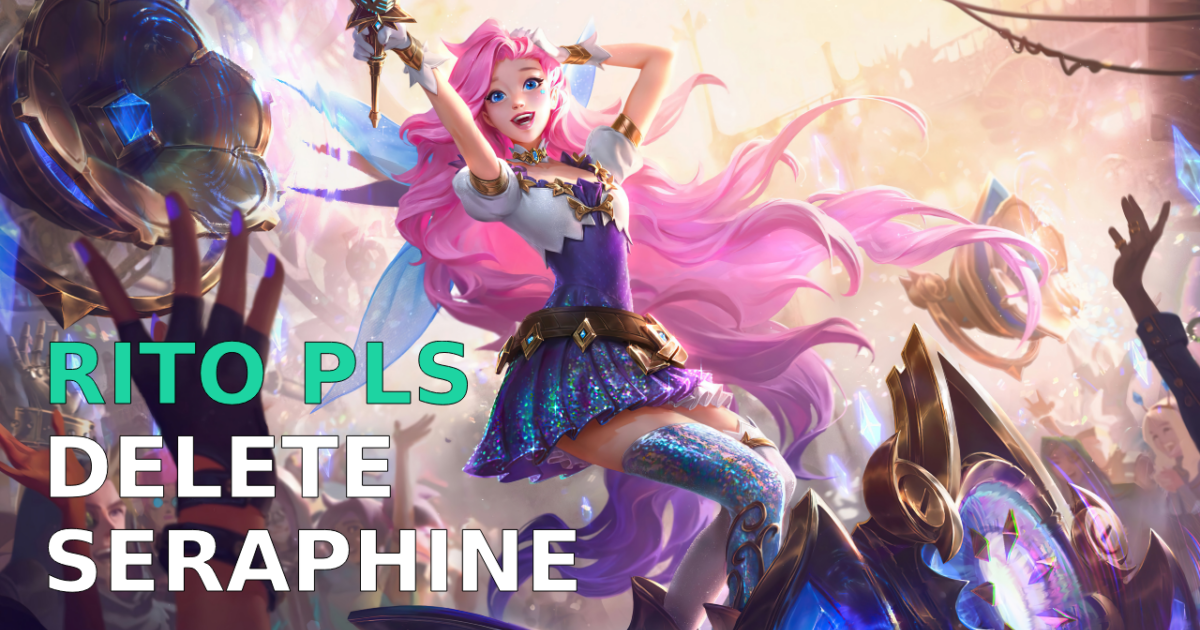 Seraphine was released a little more than a year ago. She was one of the most hated champions within the game upon her release. Today we’re going to be taking a look at just why everyone hated Seraphine, and why you might still hate her.

She is the ‘starry-eyed songstress’ and full of positivity. Do you think she would fit in the League of Legends’ world? We’ve already got Lux Sona, did we really need Seraphine, who seems almost like their child? Let’s check it out!

Seraphine had five paragraphs of lore upon her release. She was a young, beautiful girl. Parents of Zaunite Piltover, who gave up everything in order to raise her. Seraphine possessed a special power, where she could hear people’s songs, which would cause her immense pain.

The only thing to save her from going completely insane was a crystal that dampened the sounds of everyone around her, but even the crystal had their own song – clearly related to Hextech and Skarner.

The crystal helped Seraphine improve, even going so far to help the young girl. This was the part everyone thought was very unbelievable since it was the people of Piltover – Seraphine’s people – that basically caused the demise of the Brackern, so why would a crystal help her?

Also, this is League of Legends, hell even Annie and Nunu have better reasons to fight on Summoner’s Rift than Seraphine. The struggle, the hardship is where? It’s not in her lore.

Her K/DA Lore was More Fleshed Out

On the other side, Seraphine was a wealth of relatable and well-written lore, thanks to her K/DA skin. She was a young girl who dreamed of becoming a star in the music industry. Seraphine got a Facebook account, a comic, and an ultimate skin that reflected her struggle. You can find out more about the ultimate skin here the best Seraphine skins in League of Legends. Let’s face it, guys, she’s beautiful. Riot would have given her many skins since then.

Many fans love this song. She was so meticulous about every detail.  K/DA lore was missing in her actual ‘canon’ lore. Therefore Seraphine just felt like a character from ‘our world’ that was dropped into Runeterra. She didn’t fit into the world that Riot was trying to create with League of Legends.

First, is Piltoverian the right term? We’ll get on with it.

To top it all, Seraphine felt alien in Runeterra’s world., many also believed that her outfit didn’t match that of anyone in Piltover. Seraphine didn’t look like someone who came from Runeterra.

Redditor Made Simple Changes to Her Outfit, Making her more relatable from Piltover.

Now if you’re not a lore expert, then maybe you didn’t even notice any of the things we just stated. You just like to play League of Legends, but don’t give a single shit about the lore and characterization of the champions you command. What is your problem with Seraphine?

Well, many believe that Seraphine’s kit should have gone to Sona. Sona is also a music champion and their abilities are very similar. Sona could have had many of these upgrades to her boring kit which leaves her at the lower end in the play rate.

Sona mains believed that Seraphine wasn’t more than Sona 2.0 when Seraphine came out. It should have been a simple Sona redesign of her kit.

What do fans think? Do you still hate Seraphine? Or should she be removed from League of Legends? If we take a look at both Seraphine’s and Sona’s win rates, we can see that? Sona is the winner of the deal, with a 53% win rate that seems to be almost constant, while Seraphine has been struggling.

She is also part of the meta and can be seen in pro occasionally as niche picks in either the bot lane, or the middle lane. While Seraphine is often referred to as a support player, her actual numbers are the worst.

Would you want to remove her? Are we still required to use #JusticeForSkarner? It seems like Riot might be fazing out the idea that the Hextech crystals stem from the Brackern, so we might see a change in Skarner’s lore as well in the future.

Nevertheless, this article was written and edited by Ironic Seraphine main So, I personally enjoy playing the game with her. Gotta ask everyone whether they’re my first hater, right?