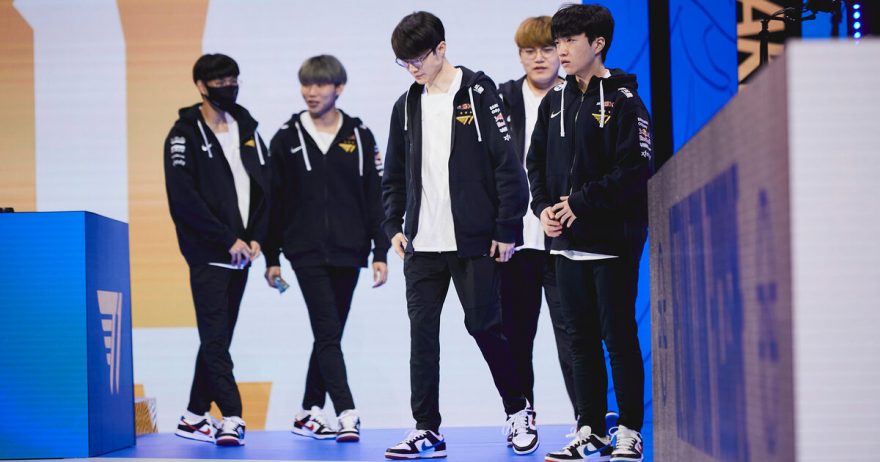 The 2021 LoL Esports Off-season was a thrilling time for players, fans, and organisations. However, Drama is at an all-time high This even applies to the LCK, which is usually tame compared to what we’ve seen from the LCS and LEC in recent years.

CannaTop Laner for T1 currently finds himself in a difficult situation with his contract. Several teams have inquired about him, but this star player’s 2022 season is still up in the air.

What happened to T1 and Canna?

Original report by Inven Global DotEsports, T1 planned to meet with Canna about his salary for 2022. They would make him a free agent if they couldn’t agree on an arrangement. Evidently, Canna asked for a transfer from the group several times. T1 claimed to have placed the top transfer market laner and intended to replace him in 2022. But, it may not have been.

Canna’s agency says that he never asked for a transfer. His side of the story says that he only talked to the T1 general manager “Polt” regarding his future after T1’s COO, John Kim Passed away. Allegedly, Canna He wanted to verify if the verbal agreement he had made with him was valid. John Kim It would still be realized. Finaly, T1 wanted to transfer Canna despite his desire to stay.

The situation worsened. A transfer was allegedly stopped by T1 To an unknown team Negotiated with another group This obviously ran.
Contrary to what they previously agreed to. Canna’s agent says he is now stuck and unable to hold T1 to their word.

Canna is still at T1?

This is basically what it means Canna cannot find a team to help her in 2022 so she is stuck at T1. Canna was a top-notch laner at Worlds 2021. This made him a valuable commodity for any team. We all know players can burn out quickly in Esports, so it’s rough for him to miss out on an immediate paycheck in such a volatile industry.

Canna was let go by T1 but was signed by Nongshim RedForce to play in the 2022 LCK Season. Ghost, Dread Effort, Effort, and BDD will join him on Nongshim.

Canna has been accepted into NS RedForce. Although it was a difficult road, we are grateful to Canna for his willingness to join us in 2022. Canna’s extraordinary performance at NS RedForce is something to look forward too.#NONGSHIM #NSTOGETHER #NSRedForce #LCK #Canna pic.twitter.com/NBVA1RfWhq

What did T1 think about Canna?

Almost immediately after this story came out, provided by Canna’s agent, T1 held a press conference in response to the issue. Polt claimed that If Canna can provide proof of his original agreement, the team will stand by it. They do have a lot of potential. “No intention to release Canna in free agency as of now.”

It’s also worthy to note that Polt It was confirmed that T1 remains the final authority to make any transfer.He is still under contract with the organization. This is what he had to say about the future.

“I want to let everyone know that one of the teams that we’re in talks about Canna’s transfer has offered the best options for him. We at T1, especially myself, are doing everything in our power to protect our players’ rights. We all wish nothing short of the best for all our players, and hope that Canna will have a successful career as well.”

Hopefully the situation can be resolved, and both sides will be happy. As we all know, Esports is not always easy. Either way, fans can likely look forward to seeing Canna play in the LCK next split – regardless of which team he’ll belong to.