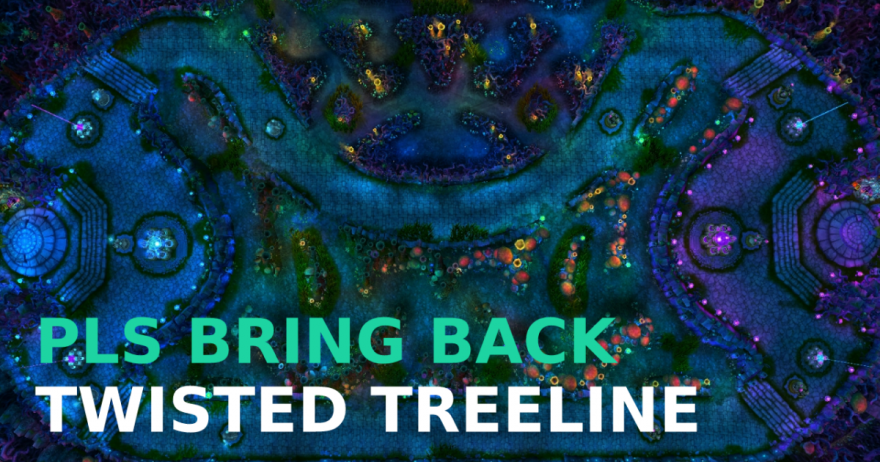 If you’re new to League of Legends, then the term Twisted Treeline will not ring a bell. It’ll be a weird term you’ve heard before, but you won’t be able to make any specific associations with it. What does this treeline mean? It was removed from the ground in a strange place.

Today we’re going to be taking a look at Twisted Treeline, what this map was about and what eventually happened to it. So let’s dive into it.

Twisted Treeline began as a League of Legends custom game mode when it was first released in 2009.. It didn’t take long for the game mode to be added permanently. It was added to the game in 2010 a few months following the release of League of Legends.

This game mode was very popular and enjoyed by many players. The map was big, had a huge jungle, like on Summoner’s Rift and overall, it gave players a different way to experience their favorite champions.

The original Twisted Treeline map offered players multiple buffs due to jungle monsters. A dragon was also located in the middle of map which could offer teams tremendous benefits. – and let’s be real dragon buffs only came into existence in 2015 for Summoner’s Rift. Not to mention, there were multiple brushes to place wards into, making it feel like a different version of Summoner’s Rift.

So what happened and why was Twisted Treeline so inconvenient?

Riot made the 2012 decision to redraw the entire Twisted Treeline map. Gone was the multitude of monsters, replacing the top half monsters with a single one – Vilemaw – whom you might know from Elise’s lore.

Altars were also added, and players could basically capture altars in a ‘capture the flag’ style of gameplay. Riot had a third game mode ‘Dominion’ which seemed to inspire these altars that were added into Twisted Treeline.

Players were also disappointed by the new map’s smaller size. Warding wasn’t available in the game either anymore.

Why was the Twisted Treeline Map Remade

Riot upgraded the Twisted Treeline map to improve its visual quality in 2012.. The map looked dated and shabby up to that point.

Also, the original map was pretty big, which meant there weren’t many fights on thereThis made it boring and long. The map was squished to allow for more interaction among the six players.

Riot was unable to complete the Twisted Treeline map rework.

Many players have stopped playing Twisted Treeline since the rework.. It was infested by leveling bots and waiting for one game could take more than 15 minutes. It was a long wait and a terrible experience in-game, which led Riot to abandon Twisted Treeline.

The mode was barely updated, nothing was ever fixed, and players who enjoyed the 3-vs-3 game mode couldn’t stand it anymore. It was pure frustration. It was frustrating to sit for 10 minutes waiting for a game only to find that leveling bots had infested the game, sucking all the fun from it.

When was Twisted Treeline removed from the LoL Client?

Is Twisted Treeline returning as a Rotating Mode?

Since it’s removal, fans have asked to have the game mode back, at least as a rotating game modeOr to include the original Twisted Treeline into the game.

Riot hasn’t mentioned Twisted Treeline being added back to the client. This would allow for new rotating game modes, such as Unsealed Spellbook Create a new, improved map Nexus Blitz.

We will never see our beloved OG Twisted Treeline again. Please give me your green and white buff Riot!