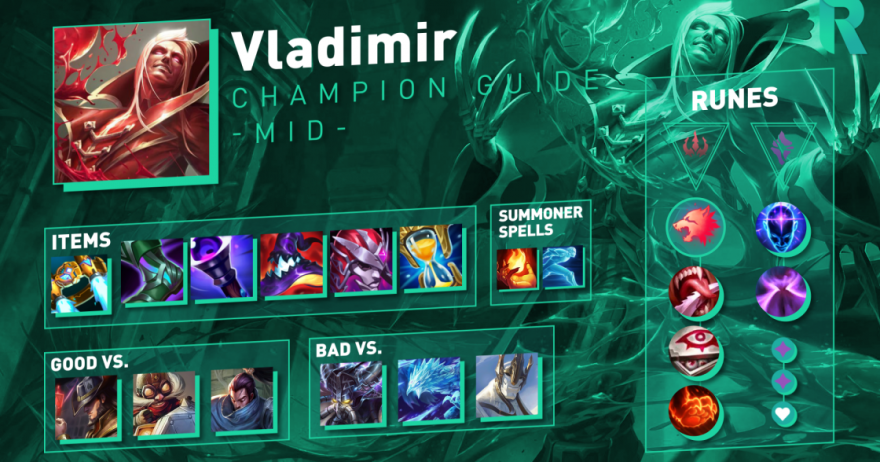 In this guide I’ll be talking about one of League’s most infamous champions. Vladimir is often seen as easy and powerful, but he is far from easy.

Most mid-lane champions have some utility. Lux is able to snare. Yasuo has a knock up, Neeko has a root etc. Vladimir doesn’t possess any of theseHe is now in a very strange position. A champion can still contribute to the team even if they are behind. They can protect their allies with shields or lock down enemies with CC. However, this is not true for Vladimir, he’s genuinely useless behind. The only thing his champion brings is damage and safety, This makes the champion a lot riskier than others leaving effectively no room for error on Vladimir.

Vladimir definitely has his benefits. Being one of the most powerful scaling champions in the gameVladimir is a danger past 30 minutes. You wonder why Vladimir doesn’t dominate meta more, when he can scale and is so safe. The Blood Lord must overcome a few obstacles before he can explode the Nexus.

Vladimir is one of only a few champions who uses his health to his advantage. This allows for some very interesting gameplay. This means he has a really unique learning curve, because minor mistakes can lead to the player unintentionally killing themselves by mismanaging their health.

Players will be able to recognize this and reduce the number of mistakes they make when positioning. Vladimir is unstoppable and it feels like there is no way to counter him. This black-and white dynamic makes it easy for players to think he’s superpowerful or easy. But in reality, he’s just really difficult.

Vladimir, unlike other hyperscaling champions, (Jinx and Kayle, Kassadin), has no utility. This means Vladimir is useless and cannot help if he’s behind. Knowing your limits and knowing when you can and cannot go in is the most important part of playing Vladimir. This is made worse by the fact his health is the only resource he has to cast spells. Vladimir will be a dominant and oppressive player because of the safety of his pool.

He is a late game hypercarrier This guy is very safe in lane and it’s impossible to stop him scaling. Playing high-tempo champions such as Galio or Twisted Fate is a better way to keep him from escaping. Vladimir cannot scale this much and it will have a major impact on the game. But due to his strong laning tools a good Vladimir will hardly ever lose lane, making him one of the scariest champions in the game.

If Vlad Is That strong, Why Isn’t He Dominating The Meta More?

Vladimir has an incredible learning curve. Many players are discouraged from trying to pick him out. Vladimir is not for the weak of heart. Vladimir is not like Twisted Fate, Lux or Lux, which are easy to learn. This guide will help him, but it is going to take some effort to learn.

The meta is often modeled or defined after high-elo play and pro-play.. Because he is not a common challenger player, not many people play him in Bronze-Diamond. Vladimir’s inability to be a dominant presence at high elo or pro-play is due to his dependence on scaling. Games were played at a moderate pace for a long time, with teams aiming to finish the game in around 30 minutes. Late game champions like Veigar and Kayle have been removed from the meta. This preseason has seen a lot of changes with the mage update. Vladimir has been extremely present in high levels of elo. While he is only being played Toplane by pro-play, his meta is more delicate than that of the solo queue ladder.

Vladimir is a great reward for anyone who spends enough time with him. As you can see Elite 500’s OP.GG His stats at challenger Elo have been excellent in the last few seasons. He is a great player in the right hands.

How do I play Vladimir Mid?

Vladimir can fit into one of two playstyles at the moment. The late game scaling Vladimir, and the Lane Kingdom Vladimir. Both styles are possible and require different skills. One is great for competitive play, while the other is better for climbing up the ranks.

Elite500’s Vladimir is a late game scale Vladimir (Best Vladimir in all of the world). You Purchase lots of Ability Haste Focus on farming at a perfect 10cs/min. This build is used in professional play.This is the standard playstyle. It makes use of Vladimir’s incredible safety and places the enemy on a timer that ends the game before Vladimir gets online.

If you are going for scaling, it is best to have 0 deaths at the end of lane. Vladimir Mid makes the common error of over-rotating. Vladimir is very dependent on XP and gold, so rotating during the laning stage can be a big risk. You won’t do it 9/10 of the time because you run the risk of getting behind. Once you get behind your game is over. You need every ounce of XP or Gold to scale.. Your game will become very difficult if you aren’t ahead of your lane opponent in XP. Vladimir doesn’t play in pro-play nearly as often as you would expect. He can’t afford not to rotate and help his team earlier.. If you do leave the lane, you are taking a risk. Even if the odds are in your favor, it is better to keep your eyes on the lane and maintain that steady 10 cs/min. This playstyle relies heavily on Mejai for much of its damage/AP. Rotating can lead to death and loss of stacks.

All Eclipse Skins from League of Legends

Vladimir loves to build large amounts of AP. His passive converts AP into HP, and vice versa. This means items such as Rabadon’s or Mejai’s have a greater value for him than other champions. Scaling Vladimir is possible if you have enough pink wards. You also need to track enemy Junglers as they are the greatest threat to your winning chances.

The Lane Kingdom Vladimir is the other playstyle. This build focuses on Maximizing damage and gaining control over your enemies to slowly choke them out of the game. The scaling build requires map awareness and excellent farming skills. However, matchup knowledge is essential for this build. It’s all about you being able to outplay your opponent while building leads for yourself.

Vladimir is easier to master once you have played all the matchups in the middlelane. You will identify your lane opponent, and then you’ll respond accordingly. When fighting control or burst mages like Lux and Orianna, you want to take Predator and rush Rocketbelt. This will allow you to deny your opponent a lot of CS/XP. If they approach you, you can pop Predator and get a free kill.

If you’re against more aggressive laners like Qiyana or Zed, you can take Summon Aery and focus on poking them out Auto attacks and Q’s are very effective early. Vladimir can trade very well in lane because of his Q. It does a lot more than just do damage to the enemy but also heals him. Vladimir can easily outstash and out trade virtually any other champion using this tool. Vladimir will be the most difficult to defeat in lane due to his combination of bone plating, Summon Aery, and Summon Aery.

It is important to know your limits before you play.. Vladimir towerdiving is a skill he excels at, especially when he is ahead. If Vladimir has a good lead and knows how to use, he can kill two or three opponents in lane and then put them down multiple levels. XP. Even if they are a safe champion such as Corki or Lux. This is the problem. If you towerdive your opponent’s jungler, it can backfire really hard. It is important to keep an eye on your map and be alert to their junglers before you start towerdiveing.

So, how can I build Vladimir Mid?

Rocketbelt should be your first itemBefore you go into Lucidity Boots, and Cosmic Drive. This will maximize your The ability to be kind This will make farming easier. You can then go to Rabadon’s or Void Staff. Once you have Rabadon, you can go online and take control of the game. If you are farming well, it usually takes between 28-30 minutes. This is the point where you can use your enormous damage to influence teamfights and help your side win. If you’re ahead and want to push your advantage, Void Staff/Mejai’s -> Rabadon’s is the path for you. Vladimir can use his Predator Ghost, Rocketbelt and Ghost CD’s to play and cause him insane burst damage.

Both Zhonya and Banshees have good most gamesYou have to be sure that the situation is right for you. Shadowflame can also be used as an alternative to Void Staff If the enemy team has a lot more shields than you have, and they aren’t building MR. You can close the game normally after you finish Rabadon’s. If you have even more gold, Demonic Embrace is a passive that gives Vladimir a big boost in his stats.

It can be hard to itemize on Vladimir, but it is common to try to get as many pen as you can when you are ahead or playing aggressively and trying to gain as much control as possible as you are behind or trying to scale.

Vladimir is an exciting, fun Champion to play. To make it work, he needs his (blood) sacrifice. Even if Vladimir doesn’t end up in your hands after reading this guide you will be aware that high-tempo utility champions like Twisted Fate or Galio are great counters. Anivia, a great counter to Vladimir, is also available.

As with any extremely difficult champion, patience is key to learning them. You’re not going to win at first, so you should probably learn him in Flex or Draft queues.

VOD’s are a great way to see high-elo Vladimir players. the #1 Vlad NA Or the #1 Vlad World.

Thank you for reading! Good luck to all vampire fans out there, Twilight Enjoyed-I mean Vampire Fans!

This is just a small sample of the content we create daily. Riftfeed!