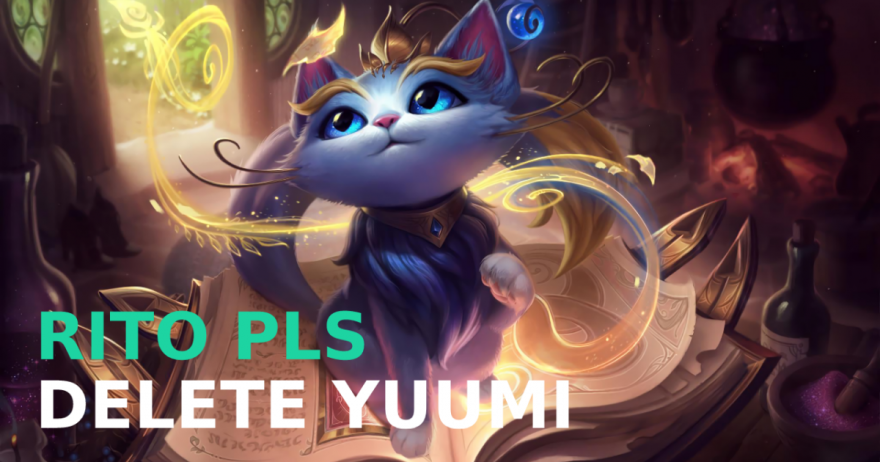 Yeeeaaa, well. How do I begin? Yuumi That furry fiend. Mega pain, no joy and anyone who chooses her may have lost control over their own lives. This is how it is and it’s hard to deny. Yuumi is the opponent It’s like walking on Lego. In a very short time, it’s like stepping on Lego. The pain gets worse and the pieces become sharper. You might be wondering, “Why all the hate?” Let me tell you. Five reasons I believe Yuumi should be removed from the game!

Remember the interview where Riot asked if Yuumi was balanced. It was a simple question of ‘No‘. Isn’t this enough? Imagine designing a champion and It is completely lost track of its balance and harm it causes to… ME! You can even sign a petition change.org Which wants Yuumi to be taken out of the game. Seen you guys? This is not the first time I want this to happen. Riot, remove her from the game!

This column has a journalistic foundation so I will maintain my integrity. I love to rant about cats. Let’s now get to the facts about Yuumi..

1. Yuumi sucks because: The Gameplay is not Interactive

What is Yuumi’s game plan? You can then bind your ADC or any other fed ally. Throw some autoattacks every once in a while and heal your allies from time to time – while sticking to them, of course. You don’t have to do any of that moving or recalling. They can even farm your experience. Already feeling like a mechanical god? Yuumi likes to climb while watching a series..

2. Yuumi sucks because: The Toxic Submarine

Have you ever heard of the Submarine toxic? This is when Twitch Yuumi unite. It’s brutal. Do you remember Yuumi’s glue-gluing technique? Yuumi glues herself to Twitch. The rat follows. Stealth modeYuumi follows Yuumi. Yes, you heard right – Two invisible furries for the cost of one. Yuumi is a master at identifying broken mechanics that make no sense but also empower her kit. Imagine being amazed by Yuumi’s hyper-carrier and her rooting, healing cat friend. Gross.

3. Yuumi sucks Because: She is unstoppable

This point is not for you if you are mad. You’re on the correct side of the rift – the one Yuumi isn’t on. Because she is a freaking healbot it is difficult enough to kill any of her team members. But what about herself? It’s not worth thinking about. If she has any allies, she will not hesitate to jump to them if the first one is gone. She is a blood sucking tick. Yuumi suckers your blood instead. Yuumi players will also suck your entire soul.

4. Yuumi sucks Because: She isn’t available for a solo session

Yuumi is unable to stand on her own. She is dependent on an ally so she cannot do A N YT H I N G by herself. The devilish cat will likely stick to her ADC like a piece o gum. You can play the shield bot game and press E to get heals every once in awhile. Grab a drink or snacks and go back. You can play Yuumi and it won’t matter..

5. Yuumi sucks because: Furries have no place in Summoner’s Rift

The perfect event idea is to have Norra enter the game. Since she’s Yuumi´s master, the event could be all about a fight between them. Norra returns her book and banishes Yuumi in a new realm. Yuumi is gone. Norra did the right thing, and everything makes sense lore-wise. You’re welcome, Riot!

Why is that? Common is the right question to ask. Summoner’s Rift can be used by heroes and monsters, not just for furries. Yuumi, get off!