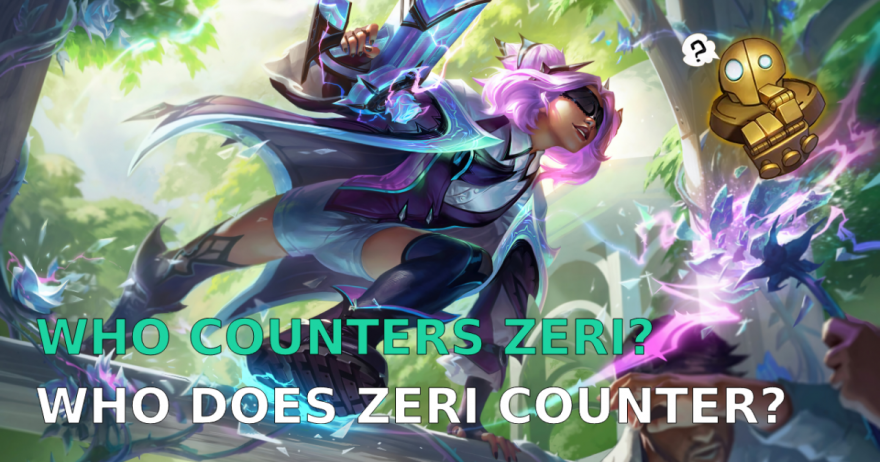 Zeri is the newest ADC in League of Legends and she’s been tearing up the rift ever since her release. She was given an immediate nerf, one in her first patch, and another in her current patch.

Riot releases the broken champions Never. Zeri is a unique player who brings a new twist to League of Legends. It’s obvious that she will be difficult to balance. She’s even seen light in pro play already, but this makes us wonder, when you lock in Zeri, who is the enemy going to pick? Or what situations will make Zeri have a blast? Let’s check out which champions counter Zeri and who you should play her into.

Which Champions Can Counter Zeri

If Zeri is being picked on by an enemy team, these champions are ones to play. They have one of the highest win rates against ADCs and will help you win lane, and eventually the entire game.

Caitlyn’s range is much greater than Zeri She can be extremely deadly if she has some attack speed. She can shred through the new ADC with ease and if Zeri isn’t careful and wall jumps into a Yordle Snap Trap she’s basically dead.

Caitlyn can match Zeri’s speed and damage.Zeri players should avoid her as she is one of the few champions they can play against. You should quickly choose Caitlyn if Zeri appears to be locked in.

Vayne can move at the same speed as Zeri, matching her step by step. This makes her an excellent choice for the ADC. You are just as mobile as Zeri, able to dodge any oncoming attacks and let’s get real, Vayne in the late game is unmatched, not even Zeri can keep up.

With Vayne’s E she can pin Zeri down and quickly finish her off. Zeri mains won’t have a good time if you pick Vayne against her. Vayne can two-shot Zeri in the final stages of the game because she has no defenses.

Twitch is an annoyed sewer rat. However, he is an excellent picker for Zeri. His invisibility allows Zeri to sneak up on him and make quick work from Zeri When she is weak. Sneak attacks have never been more effective and we recommend that you take him in to her.

Twitch is another annoying nuisance who can make quick work out of Zeri. For the perfect combo, just sneak up behind her and poison her. Zeri won’t be able to press Q fast enough to get away from you. EZ GG.

What Champions Does Zeri Counter

Zeri got so many nerfs for a reason. She’s one hell of a champion and if we’re being honest, how many people actually play Twitch these days in solo queue? Zeri is a formidable champion, despite having a few counters. These are champions Zeri enjoys to challenge.

Samira could be an interesting and unusual pick. With her gun and blades she can switch between melee form and ranged, which is quite unique. But she will have a hard time going up against Zeri.

Zeri is quicker, but she also has more mobility in her kit. Samira will quickly be erased from the map by one jump over a wall. Samira won’t have time or space to gain any style points for her ultimate and will lose against a quick moving late-game champion like Zeri.

Ezreal is an identical champion to Zeri. He’s mobile and he is very skill shot reliant. His best phase is the middle game. Zeri can scale higher than that. Her charge makes her much more reliable in teamfights.

Zeri will have more fun laning against Ezreal and, while she might stumble in mid-game, the late games are nothing to laugh at. One well-timed and landed ultimate and Zeri is off shredding through anyone – especially a squishy champion like Ezreal who won’t be able to escape her clutches.

Aphelios is interesting because he’s got so many options in his kit thanks to the multitude of guns he’s got in his arsenal. But does this mean that he can beat Zeri? Not at all. He is very immobile, and Zeri will destroy Aphelios because of her speed in moving.

Aphelios does have many options. he’s just horrendous when played into Zeri. Her green gun can be evaded easily so she will have the range advantage. Zeri, on the other hand, can just ult or run all over the place in the last game. Is Aphelios a possibility? Nope.

Are you Zeri has been tried What was your favorite game in the last few weeks? How does it feel for her to auto with her Q. You can learn more about Zeri and how she plays here. Zeri champion build guide So you can master this fun and unique ADC!